Click on any image to view captions and gallery. 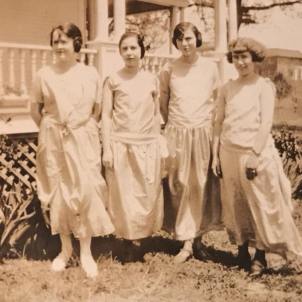 Years may come and years may go but these annual Junior-Senior banquets seem to “go on forever.” Another similar occasion is about to be recorded in the annals of the past, and we hope it brings as much pleasure to all of us as previous ones have, for the Junior class of 1924 of dear old M. A. S. does not desire to fall back “one jot or little” from the reputation of previous…

…years. Seniors of both institutions as “Teddy” used to say, we are “de-e-elight”to have you with us, and we welcome you most cordially among us at this time and at all times. We hope you will enjoy all the good things of life we have tried to provide, and also each other’s society; and we trust this evening will indeed prove “a feast of reason and a flow of soul.”

Married Oscar Lee Poole (b. 22 May 1901, Rowan Co. NC, d. 21 Mar 1985, Cabarrus Co. NC) on 28 Dec 1927, Cabarrus Co. NC. (In parsonage of St. Stephen’s church)
1 Child – Francis Elaine Poole (b. 27 Nov 1928, Guilford Co. NC, still living) wife of James Lemuel Staton (dec’d).
Oscar & Kate are buried at West Lawn Memorial Park, China Grove, Rowan Co. NC.
The 1918 photo is not good quality as I cropped it from a photo of a Rinehardt family reunion. Kate is standing behind her mother. Her father is to her right and the baby is her sister, Lena, b. 1918. Kate was the oldest of 8 children, 6 of whom survived to adulthood. The age difference between Kate and her youngest sibling (sister) was 18 years. Kate’s brother, Roy Hammill, the only male to survive into adulthood, attended MPCI in 1924 -25.
Interestingly the minister who married Kate and Oscar, Rev. Wade H. Dutton, also attended MPCI in 1904-1906.

Miss Kate Hammill and Oscar Poole Wedded December 28
CONCORD, Jan. 7. – A wedding of marked interest to their many friends was that of Miss Kate Hammill and Oscar L. Poole, on Wednesday afternoon, December 28, at St. Stephens Lutheran church parsonage. Rev. M. N. Dutton, pastor of the bride, performed the ceremony. It was a quiet and simple affair, being witnessed only by a few near relatives and friends. After the wedding the nuptial party was given a bounteous supper by the pastor of the bride, Mr. and Mrs. W. H. Hammill.

Services will be conducted at 3 p.m. Thursday at Trinity Lutheran Church, where she was a member, by Rev. James C. Stirewalt. Interment will follow in West Lawn Memorial Park.

The body will remain at Linn-Honeycutt Funeral Home here until taken to the church at the funeral hour. The family will receive friends at the funeral home from 7 until 8:30 p.m. today and at other times they will be at the home of her daughter.